Wastewater treatment plants can increase capacity while reducing their carbon footprint. The city of Fredrikstad is proof. Learn how this Norwegian municipality is expanding its capacity with circular design and energy efficiency in mind. 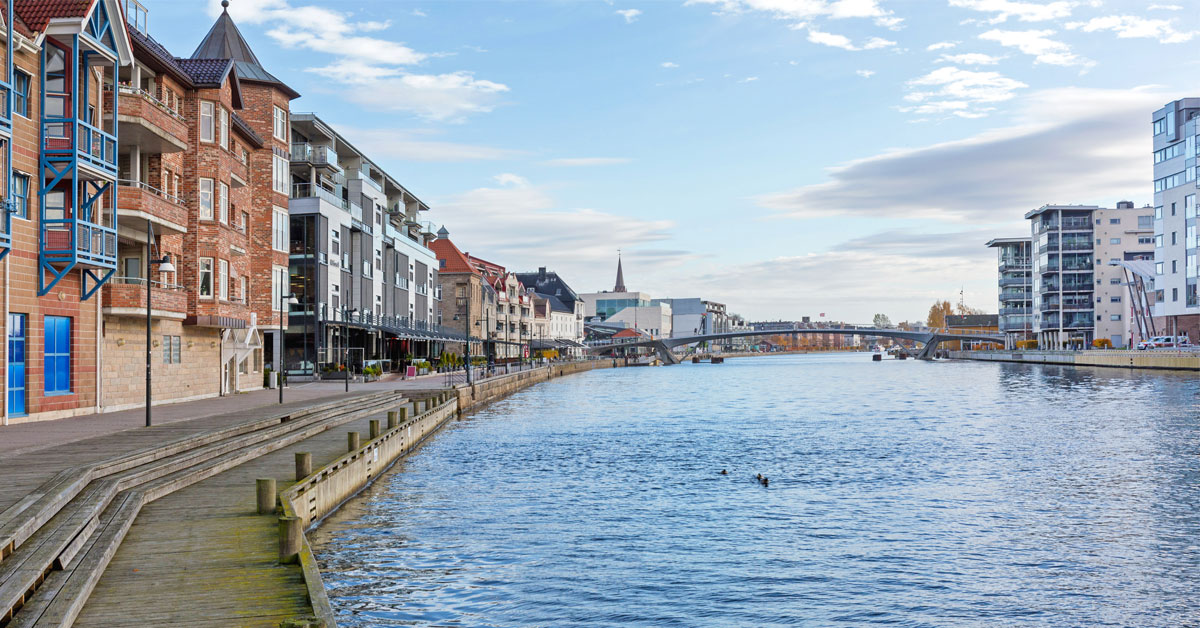 When the Fredrikstad wastewater treatment plant (WWTP) was built in 1989, its hydraulic capacity was perfect for the area’s needs. But decades later, more frequent downpours and population growth have maxed out the plant’s capacity. It was high time Fredrikstad looked to the future.

Now the city is expanding its WWTP and building sustainability into the design. The new carbon-neutral facility will be fit for the circular economy and play an important role in Fredrikstad’s approach to climate adaptation and mitigation.

“We certainly feel climate change here in Fredrikstad. There are more heavy rainfalls and stormwater overflows,” explained Torbjørn Bakke Henriksen, an engineer for the Department of Water and Sewage.

On a dry day, the Fredrikstad WWTP processes about 30,000 cubic meters of water. But in recent years, intense rains can send more than 80,000 cubic meters gushing into the plant in a single day. “This facility was never designed to handle that much rainwater,” Torbjørn points out. More severe weather, coupled with population growth, meant Fredrikstad needed to invest in new infrastructure.

Torbjørn said his team looked to the United Nations Sustainable Development Goals (UN SDGs) for inspiration, especially SDG 12 about responsible consumption and production. “One of the first things we did was set project goals that were aligned with the SDGs, as well as national and regional targets. We want our new WWTP to be carbon neutral from day one,” he said.

The plant will use sludge to produce biogas for its own operations and for local energy needs, something the existing WWTP already does. However, the new facility will take things a step further by adding solar panels and using more energy from wastewater, thus becoming fully self-sufficient when it comes to heat and energy use.

We want our new WWTP to be carbon neutral from day one.

Going beyond compliance with circularity

The Fredrikstad team also has big plans for resource efficiency and more materials recovery, which will make their already-circular system even better and further reduce their carbon footprint. It will also ensure they comply with strict new environmental mandates.

Torbjørn explained that the city has signaled it is likely to implement new nitrogen removal requirements in 2025. As such, the new plant will include secondary treatment and nitrogen removal – enough to account for population growth, as well as growth of local industry.

Learn more about water and the circular economy.

Already known for their strong commitment to circularity, Fredrikstad’s new WWTP will build on their existing model, which is rooted in long-term cooperation with neighbors like Kemira. In fact, for 40 years Kemira has been one of the main technology providers for the Fredrikstad plant. Ever since we moved to the area in the 1970s, we have applied our chemistry expertise to support more responsible consumption and production. At that time, regulators had just prohibited a nearby titanium dioxide facility from dumping by-products into local waterways. Kemira recognized the value of the wasted iron and repurposed it to produce iron chloride sulphate, a coagulant that became critical for Fredrikstad’s wastewater treatment.

But that’s not the only way the Fredrikstad WWTP embraces circularity. The plant, managed by FREVAR, an organization that operates many of city’s utilities, is always discovering new ways to service neighbors in other sectors, which makes resource and energy recovery an economically attractive option. For example, at the end of the water treatment process, they find new life for sludge as fertilizer for agricultural use. They also use sludge to produce biogas that fuels public buses. Under a separate but related waste management division, FREVAR operates an incineration plant that generates steam. Coming full circle, some of that steam powers Kemira’s coagulant production.

Going forward, FREVAR will prioritize more materials recovery at Fredrikstad’s new WWTP. Today they remove about 90% of the phosphorous from their wastewater, but the new facility aims for 95%. To that end, they’re interested in piloting a new technology developed by Kemira and several partners. The solution, called Vivimag, is a magnetic separation process that recovers vivianite, a type of iron-phosphate found in sludge. By separating the iron-phosphate from the sludge, Vivimag offers a safe and convenient solution for recycled phosphorous fertilizer.

“We have a pretty close relationship with Kemira since we purchase coagulants, but we have also worked together on optimizing processes,” said Torbjørn. “It’s a great asset to have a company like that so close by.”

Want to stay up-to-date on what’s happening in the industry? Subscribe to get our Insights straight to your inbox.
PLAYBOOK

What is the most sustainable and reliable way to recover phosphorus from wastewater? The jury for the project innovation competition at the IWA World Water Congress & Exhibition decided that one of the most promising technologies is ViviMag®, granting it the silver award in the “Breakthroughs in Research & Development” category.

In this on-demand webinar you will learn why HSY has opted for Kemira’s novel biomass-balanced polyacrylamide, a water-soluble polymer, for their sludge dewatering process, and how it is contributing to HSY´s sustainability performance.
1 5
Stay updated